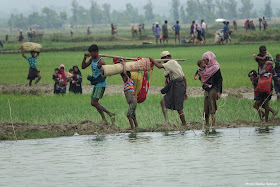 We are deeply dismayed by the openly anti-International Criminal Court (ICC) view expressed by Dr. Wakar Uddin, the Director-General of the Arakan Rohingya Union (ARU), in his Burmese language interview with the Voice of America, on 23 September.

In his words, “the ICC is not the solution to solve the Rohingya crisis. The Rohingya people and refugees have no intention to bring Sr. Gen. Min Aung Hlaing and other military leaders to ICC for perpetrating genocide and crimes against humanity as detailed in the recent UN Fact-finding report.”

These words add insult to our community’s collective injury.

Our fellow Rohingyas who survived Myanmar’s genocidal killings, mass rape and communal destruction at the hands of Myanmar security troops and armed Rakhine militia groups last year have consistently and overwhelming expressed their desire for justice and accountability at every opportunity.

We find it unconscionable that Wakar Uddin publicly opposed the strident calls for holding to account Myanmar perpetrators of “gravest crimes” in international criminal and humanitarian laws not only against our Rohingya people, but also against other ethnic communities in Kachin and Shan states.

To our community’s palpable outrage, Wakar Uddin has instead echoed the perpetrators’ offer of “domestic inquiry”, while such national inquiry commissions have been used to exonerate Myanmar killers, rapists, arsonists and baby-murderers.

On 24 September, Bangladesh’s Prime Minister the Honorable Sheikh Hasina reportedly presented (international) accountability and safety – including a ‘safe zone’, if necessary – for the Rohingya people as part of her three point-proposal at the ‘High-level Event on the Global Compact on Refugees: A Model for Greater Solidarity and Cooperation’ sponsored by the UNHCR at the UN Headquarters in New York.

We are gravely concerned that the Rohingya leader holding the position of the Director-General of the organization, which is treated by the OIC as the representative body of our Rohingya people, has undermined, opposed and invalidated our collective, express wish for international accountability.

We therefore state that Wakar Uddin’s view in no way reflect the need and wish of Rohingya victims and survivors of Myanmar’s systematic persecution. For us the genocide did not begin with mass killings and mass-rape on 25 August 2017: our community has for decades been subjected to 4 out of 5 acts of genocide with the verifiable genocidal intent, as clearly stated by the UN Independent Fact-Finding Mission on 18 September 2018.

This is not the first time the leader of the Arakan Rohingya Union has undermined the collective wish and stance of our community. Be that as it may, we hereby call on the international bodies, including the OIC, with genuine concerns for the plight of Rohingya people, not to accept Wakar Uddin’s un-representative views on justice, accountability and repatriation.

At the moment, we Rohingya people lack a broad-based representative organization worldwide which can legitimately speak for our community: our community rests on the 3 pillars, namely the genocide survivors in Bangladesh, those who are trapped inside IDP camps, ghettos and “open prisons” inside our homeland of Western Myanmar, and, last but not least, those of us in the diaspora.

We are striving towards the establishment of a democratic process and organization through which Rohingya people’s needs, views and wishes may be deliberated upon.

Meanwhile, we will not – and we do not - accept Wakar Uddin as our representative voice. He does not speak for our Rohingya people.