Let me not detail much about the harrowing accounts of horrors that the Rohingya people in Myanmar have been going through since August 25, 2017. The world leaders such as Emmanuel Macron, Recep Erdogan and Najib Razak have called it Genocide. The UN Secretary General, the UN Human Rights Commissioner, Human Rights Watch and Amnesty International have called it ethnic cleansing and crimes against humanity. Over 3,500 Rohingya villagers were massacred by the Burmese military and Rakhine extremists and approximately 220 villages have been partially or entirely burnt down in northern Arakan since then forcing nearly 500,000 Rohingyas to flee to Bangladesh.

Many familiar with Myanmar are well aware of the Burmese military’s notorious history of lies, propaganda and staging fake events to conceal atrocities. This time, in the ongoing crisis in Arakan state, they have taken the level of disseminating propaganda and lies to a notch higher. The military are staging fake events one after another and later, getting exposed internationally.

The Burmese military could have calculated well in advance about how to provoke the ARSA (Arakan Rohingya Salvation Army) -- an ill-equipped and poorly trained Rohingya rebel group operating in northern Arakan – to launch desperate attacks on Police posts, use the attacks as pretext to launch a scorched-earth operation against the entire Rohingya population and respond to international outcries against it.

Therefore, the Burmese military have assigned thousands of trolls on social media including Twitter this time (which was previously unknown territory for most Burmese social media trolls) spamming the comment sections of corporate media; human rights advocates and activists; and journalists with doctored images and videos. Although this could not make most media, human rights advocates and international community fall into the Burmese military propaganda, the method has been proven to be quite effective to confuse and distract them.

The International media and human rights groups have no free access to northern Arakan state which has been sealed off since August 25. On the other hand, domestic media and other Western countries funded Burmese media groups like Irrawaddy, DVB and Mizzima are unapologetically and relentlessly running the army propaganda. The Burmese public, most of whom are already deeply racists, are continuously being fed with distorted news and thereby, attracting popular supports for the army-led genocidal operations against the Rohingya.

The Muslims (apart from Kaman Muslims) and the Hindus in Arakan state are ethnically, culturally, linguistically and appearance-wise similar. Like Rohingya Muslims, Rohingya Hindus have been historically discriminated and persecuted by the successive Burmese regimes and most of them do not even hold 2ndCategory National ID Cards leading them to face travel restrictions.

As it’s seen now, the Burmese military are in the process of creating conflicts between the 2 communities on the basis of their religions, who, otherwise never had problems in the peaceful co-existence that goes as far back as to the independence of Burma. It’s sad that the military have begun coaxing, coercing and repeatedly misusing the minority Rohingya Hindus for political edge and concealing the military’s atrocities. On September 6, the military misused some local Hindus to stage a drama of ‘Rohingya burn their own homes and flee’ in Maungdaw and which later got exposed.

On September 24, the Myanmar government broke out news that it uncovered 28 dead bodies that the government claimed to be (Rohingya) Hindus and they were killed by ARSA on August 25. Irony is that the government-run ‘the Information Committee’ and other similar Facebook pages that have never failed to report anti-Rohingya reports or rather disseminated hundreds of made-up anti-Rohingya reports have surprisingly failed to report about the missing of these over 100 Rohingya Hindus or about their deaths on time or even in the following days in that matter. Why now?
Go through the following screenshots.

‘Kyaw Zaw Oo’  on September 12 reported that the killings of the Hindus took place on August 24 and 25. But why on August 24 when the ARSA rebels launched attacks on the police posts and military bases ONLY at around 3am on August 25? So, who killed them then? Who were the black-squads that killed both Hindus and Muslims? Were they ARSA?

As far as I and other analysts are concerned, the ARSA didn’t put up significant resistances to the Burmese military after their initial attacks. Their attacks on lasted until August 25 afternoon and they retreated. The ARSA have officially denied of killing any civilians and demanded to allow International Investigations into the Arakan state. Even then, considering that the ARSA committed mass-murders of civilians, why didn’t the Burmese military claimed they were responding to the mass-murders as well as attacks on the police posts by ARSA? Why didn’t the Burmese military utter a word about the mass murders back then?

However, many are now willing to know as to how the Burmese armed forces found out the location of the mass-graves of Hindus more than who actually killed them. The Hindu community members are also found giving different accounts to different media as to how they first came to know about the mass-graves. Watch the following video and read the remarks made by Zarni Maung, a Burmese Facebook user: 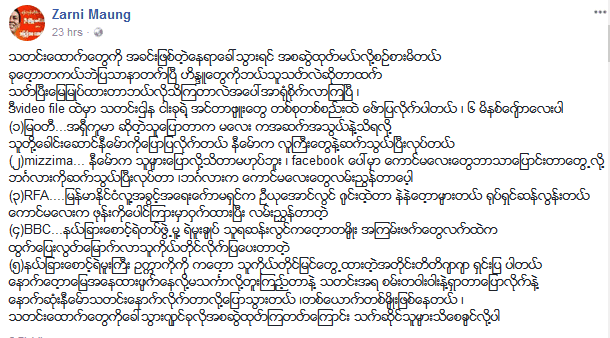 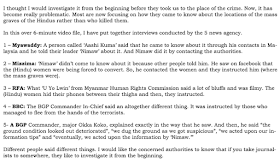 Something is really missing which needs thorough international independent investigations.

The Burmese government and military must understand that blaming or even successfully proving that the ARSA did the crimes does not give them a license to murder over 3,500 Rohingya people en masse, destroying over 220 of their villages and drive out a population of nearly 500,000 to a neighboring country. The world must understand that the (Rohingya) Hindus are not darlings of the Burmese military regime. History proves that. The military regime is clearly using them at their disposal.

It’s Genocide of Rohingya which Burmese military regime is desperately trying to conceal. With no one is given independent access to the Arakan state to freely investigate, the Burmese official sources and domestic media, the only means for the international community and media can look up to for information, have become propaganda machines and platforms for outsourcing racial and religious violence in the regional countries.

The Burmese military has been clearly looking for regional partners to come in their support of Rohingya genocide, which is unfortunately happening now. On September 26, the Buddhist monks and supremacists attacked Rohingya refugees in Sri Lanka. The Indian media such as Times Now and Republic etc and a great section of public are going berserk in anti-Rohingya campaigns labeling the entire Rohingya population as terrorists.

At this juncture of an unfolding genocide in Myanmar and widespread disinformation disseminated by the country’s the highest level of authorities, the only hope for the international media, human rights groups and analysts for accurate information is to turn to the refugees fleeing to Bangladesh. Along with great majority of Rohingya Muslims fleeing to Bangladesh, some small of Rohingya Hindus are also fleeing. In their initial accounts, some Rohingya Hindus said that they fled as they were indiscriminately attacked by the Rakhine Buddhists and the Burmese military. However, they gave different accounts in some of later interviews. [Watch below.]


One may wonder how these could be happening but it seems that these Rohingya Hindu refugees were coaxed or coerced to change their statements through their remaining relatives in Myanmar. Or it could be that the Burmese military regime infiltrated them among the fleeing Rohingya Muslim refugees with pre-planned agenda such as giving conflicting accounts of horror to the international media waiting in Bangladesh. Such conflicting accounts would discredit the genuine accounts narrated by the Rohingya Muslim refugees or at least confuse the international community about Genocide.

Whatsoever the case is, it is clear that the Burmese military are successfully outsourcing their lethal propaganda and communal/religious conflicts in the neighboring countries by this means or the other. And the current Burmese military regime, like previous ones, is clearly getting away unpunished for their genocidal operations against Rohingya.

Ne Myo Win is an activist and independent analyst based in Yangon. Views expressed here are his. He can be reached at: 88.myowin@gmail.com